In my WordPress dashboard, this post is dated back to 2018. Only now, in the tail end of 2019, am I getting back around to finishing it.

For the first few years of my “career” as a self-published author, I spent a lot of time on Twitter, to no one’s benefit. I eventually stopped, not out of any realization that my time there was not well spent (though I certainly know in hindsight), but because I simply grew annoyed.

You see, I reached a point where I couldn’t go on Twitter anymore without seeing some kind of content, usually under the #amwriting hashtag, ironically, that not only admits a total unwillingness to work on one’s writing, but that glamorizes procrastination. 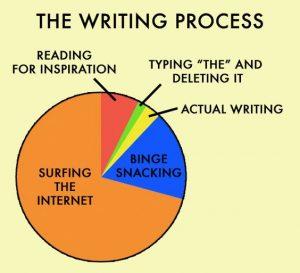 This is not cute, or funny, or charming. And compared to other creative mediums, the writing world has it particularly bad. Partly because of the persistent Hollywood stereotype of a writer who barely writes. It’s about as annoying as writers constantly hyping up their addictions to coffee.

The reality is: if you’re not working consistently, then you need to get better at time management and work on your motivation. What you don’t need is to legitimize your feelings in a self-feeding loop of shame and ironic embarrassment.

I know because I’ve been in the exact same loop, by the way. I don’t mean to imply I’ve never been like this. But falling too far into this side of the author attitude is what caused me to slow down my work, stop communicating with my readers, and generally fall into a depression with little output or plans.

I would rather writers, in general, not do that.

If you’re a writer, I’d rather you stay active and not make the concept of low productivity or helplessness “funny.” Or at the very least, not too funny. Sure, being humorous about a flaw you have can help de-legitimize it. But some flaws don’t need to be de-legitimized. They need to my tackled head-on if you’re going to get anywhere.

Stephen King wrote thousands of words a day long before there was any social media to prop up his ego and show him that he wasn’t alone in his struggles. All the greats went through that. No one spent half their day on Neflix and Instagram and also happened to meet their biggest writing goals at the same time. It’s just not going to happen.

So yeah, that type of attitude annoys me. Again, I’m not saying I’ve never been this way. I’m most annoyed by the flaws I myself have had in the past.

So what, Shane? Who cares what you think? Aren’t you just a part of the countless waves of complainers online? Aren’t you complaining about one annoying behavior on the internet by contributing to another one?

Nope. Not anymore, at least.

Over here in these parts, we balance our complainin’ with advice and anecdotes.

So I’m not just going to crabbily demand that people find their motivation. Instead, I’ll tell you how I got my motivation back, after a six-month slump throughout this year.

Here is the part that I came back to this blog post for. When I first wrote this in 2018, I was just complaining, and a hypocrite. But now I have the way out:

Stop Writing for Attention or Other External Benefits

This is probably the biggest problem I had weighing me down and making me not want to write and/or work on my career as an author, and it’s so damn sneaky, because I don’t see other blogs talking about it.

For the longest time, I relied on a feedback loop of getting attention from my writing, enjoying that, and then using that as motivation to write more. This, by and large, is setting you up for a rocky path.

Motivation can be inspired by anything. Maybe you want to sell a ton of books to spread your ideas and become a name in your industry, maybe you want your stories to have an impact on the next generation, or maybe you just, like me, want to captivate a group of fans who are addicted to what you write.

The goal in itself can be external or internal, but the motivation itself must be internal.

External motivation turns your life into chaos and misery. Why?

Because you have no control over the external things. If you’re externally motivated by getting good feedback in a writer group you go to, and then you don’t get positive or even helpful feedback several times in a row, your motivation goes down the toilet.

I’m a big fan of internal motivation, and doing things for their own sake, while also having an external goal in mind.

Let’s try an example that goes outside writing: I’m trying to get in the best possible shape that I can. The external goal that drives me is women. I want to be as attractive to women as possible. Shallow? Not really, because even though that’s the external goal, I still enjoy working out and taking care of myself. I still do those things for their own sake.

I just got back from working out as I write this, actually, and I didn’t even think about my body’s appearance or the opposite sex. I just enjoyed the challenge and what it will do for me in the coming days, after my muscles have recovered.

If I didn’t think this way, then what would happen? Well, I already know from experience. I’d ask a girl out, get rejected, and suddenly lose my motivation to work out. But these days, when that happens, all I think is, “Hmm, that time went better. I even got complimented on my physique.” Then it’s back to the weights for me.

The sense of “I’m not getting closer to my goal.” is what you want to avoid, and if you stay dedicated to the craft of what you’re doing, not the external goal, and let that motivate you instead, you’re going to be a lot more secure against any turbulence in your life.

Sure, I want to finish my current book. But when “Finish this book already!” was the motivation, I somehow ended up getting no writing done at all for months on end. Funny how that works, eh?

Doing things for their own sake, in this case writing, and using that as an internal source of motivation, will help you build momentum. Even if you haven’t written a single sentence in months, if you stop thinking about daunting outside goals like finishing a book and simply get good at a daily word count, you’ll make progress and get better from there. It could be anything. I recommend 1000, but if you’re really strapped, go for 500. Hell, even 100. You can raise it up later, but just start doing something every day.

You Can Be Funny and Harmless, Or You Can Conquer Your Shit

If you’re one of those people making light of how little time you spend writing, or how writer’s block is some monster who won’t let you use your computer, I have nothing against you. Yeah, the social media stuff is annoying, but that’s on me for looking. People will post what they want to post.

All I ask is this: are you really happy in that state?

Would you prefer to be in a state of consistent productivity instead?

Because more than anything, this is what has pulled me back into regular productivity, allowing me to finish one of my hardest books to write after being stuck on it, making no progress, for half a year.

Be motivated by the act itself.

Your goals can be what you want. Most likely, they’ll change over time. But learn to love the process of getting your 1000, 500, whatever words a day.

Do it for one week, just one week. Whatever it takes, make the time. Tell people in your life to give you a few hours if you have to. Make some sacrifices.

Just one week, and if you stick to it, I guarantee there will be another week just as productive.

Anyway, I’ve finally gotten back to blogging, am back to writing fiction regularly, and am marketing myself through things like this blog. It’s a good feeling, and I think as many people as possible should have it.

It’s more fun than re-watching YouTube videos. I promise you that.